Sorry for the inconsistency of blog posts in the last couple of weeks. I've taken on a new (and very worthwhile) position with the Education Department at the Jugendgästehaus (Youth Hostel) once or twice a week, which meant that last week I had a two day seminar to attend on top of my usual work. It was an amazing experience getting to hear what fifteen year old Hauptschüler (Secondary Modern students) knew about the Holocaust, as well as discovering their willingness to learn.

Anyway, as those of you in the UK probably realise by now, Snow is the order of the day across Europe. Technically it snowed in Dachau last week for the first time, but it soon turned into sleet and thus didn't really count. Yesterday however, the snow finally hit town in English terms, by which I mean a dusting enough to turn everything white. 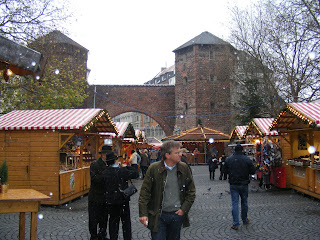 This morning I took a few of the Memorial Site on my way into work at the Versöhnugskirche. The snow made everything seem pure and beautiful, particularly with the winter sun shining brightly, almost unsettlingly so. I've read articles before about the 'problem' with memorial sites looking clean and attractive, Dachau being a very prominent example. People are often surprised how nice the site looks, coming as they do with the film Schindler's List in mind. It often has to do with memory- is KZ Gedenkstätte Dachau's primary function to remember the dead, in which case the site can be made to look attractive like most graveyards, or is it supposed to be educational and look exactly as it was? KZ Dachau was a housing estate for longer than it was a Concentration Camp, thus much of the original site had been torn down, replaced and redecorated in the time between the end of the war and a public cry for a memorial site. 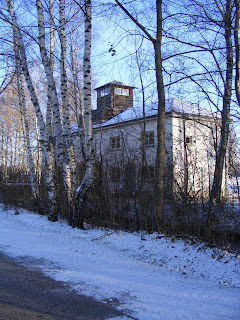 Obviously both are correct answers, though it makes the question of how to make the camp seem 'real' to someone and not turn the site into an historically accurate version of a Madame Tussauds attraction a very prominent one.

The sociologist Gerald E. Markle wrote a short book on Holocaust memory called 'Meditations of a Holocaust Traveler', in which he looks at his personal journey to answer the impossible "Why" that the Holocaust demands an answer to. His work is far too personal to my taste, his necessarily emotional tone sometimes bordering on the melodramatic, but he makes a good point about the place of trees at Dachau. 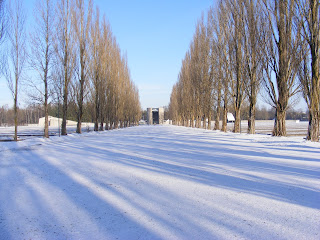 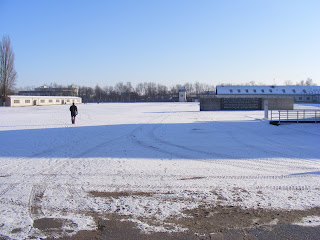 The Lagerstraße, the main street of the camp, these days has a long row of Poplars which makes the camp look quite attractive. Markle would argue that this is disconcerting for the visitor, which admittedly it is, but then again they have not been grown for the visitor. We forget sometimes that the memory of the Holocaust does not belong to us, it is merely entrusted to future generations in order that we do not forget. The bodies of 41,500 people rest here at Dachau; its first function should be its most human, as a burial site and final resting place. 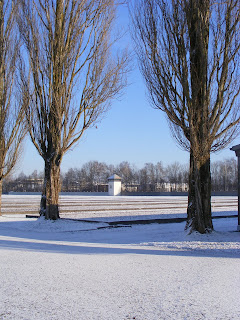