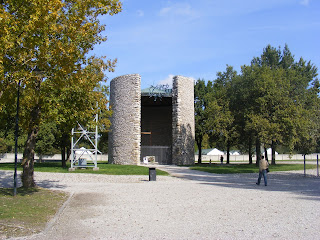 Yesterday afternoon at around 4pm, a small group gathered at the Agony of Christ Chapel at the Memorial Site for a service to bless the mass grave of those who had died here in Dachau, one that was mirrored in countless cemeteries across the world on the feast of All Souls. Following a simple liturgy, which included a Service of the Word and a Psalmody we processed from the Chapel to the Crematorium area, where the mass grave of thousands of Dachau prisoners was blessed with holy water.

The homily, preached by Fr. Klaus Spiegel OSB, one of the two Catholic chaplains to the site, was a reflective one, pointing out that although Dachau was a site of particular pain to Catholics for the deaths of thousands of religious prisoners, the attitude of Catholicism had in many ways helped to build the camp in the first place.

As with many of these services held at the site, one feels sometimes like performing animals at the Zoo. Visitors to the site stop and take photos, peering in before wandering on to see the 'real' parts of the site. The Versoehnungskirche has two walls made of glass, which sometimes makes us feel like we are in a fish bowl. I wonder if visitors do feel that we are also a relic of the age remembered by the site, when most people professed faith.

Either way the service was an appropriate way of commemorating the lives of those who are no longer remembered by name, but by quantity. It was also nice to speak with members of the Carmelite Convent who live on the site as a sign of atonement. They were all very keen to talk about their experiences of Britain, which thankfully had kept them firmly in the safety of the South!