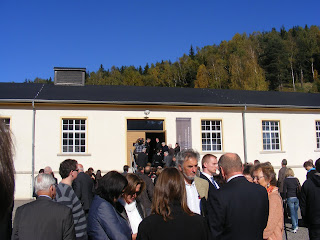 I was at KZ Gedenkstaette Flossenbürg on Sunday for the opening of a new permanent exhibition, entitled "WAS BLEIBT?" (lit.'what remains?'). The aim of the exhibition was to show the post war history of the site (where the question 'what remains' is a poignant one for reasons shown below), as well as what happened to the victims and the perpetrators. One is faced firstly with the huge volume of bureaucracy that survivors had to wade through to be recognised officially as victims and thus be entitled to reparations. Then there are sections on the trials of SS officials into the late 1960s, when the statute preventing crimes from being prosecuted after a certain number of years was removed.

Someone commented that the exhibition lays the facts bare, leaving the visitor to see the successes and the failures and judge for themselves. I cannot think of a better compliment for such an exhibition.

Just out of interest, had you ever heard of KZ Flossenbürg? It's not a nice game to play, but of the huge network of concentration camps there are the 'popular' ones, by which I mean the ones that get the tourists, and the ones that have almost disappeared from memory. Everyone has heard of Auschwitz due to the sheer number of deaths there, and everyone knows the name 'Dachau' thanks to the US Army's efforts to film the camp and open it to the press in the days after the liberation. KZ Flossenbürg however has a different story to tell.

It is no secret these days that the West German government was not the biggest fan of memorial sites in the post war years. Many sites, Dachau a prominent example, are surrounded by housing and blocks of flats (for an example see my previous post on the Titus-Brandsma-Weg). Dachau never went as far as Flossenbürg though; most of the land on which the prisoners' barracks stood is now taken up by housing. 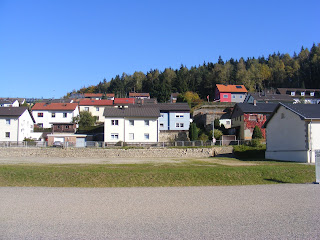 This photo was taken from the Appellplatz (parade ground), looking up to where the barracks once stood. Industry in the area had developed on the parade ground itself, and it was only in 1997 after the State of Bavaria bought the land that the last building was demolished.

That isn't to say that there were no memorials at all. The Ehrefriedhof (honorary cemetary) was developed in the area around the Crematorium, and is absolutely stunning. Seriously, Southern Germany in Autumn with its array of sun kissed Orange colours is beautiful. KZ Flossenbürg is just near a quarry, now an unofficial national park, and thus has to compete with the scenery for the attention of the visitors. 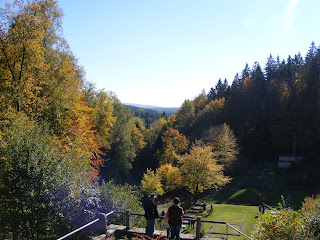 One of the first memorials built to the victims of a concentration camp was erected here, a small Chapel tucked to the side. Dedicated to "Jesus im Kerker ", lit. Jesus in Prison, the first thing you notice is the chapel's altarpiece, in which a concentration camp inmate beats a fellow prisoner while Jesus looks on in agony from the cross. There was apparently a widespread misconception at the time that those interred in camps were criminals, and were thus brutal. They were almost certainly not criminals when they went in, but whether the system brutalised them is another matter. Either way, the fundamental message of the piece, that as Christ dies for our sins people continue to suffer, was clear enough. 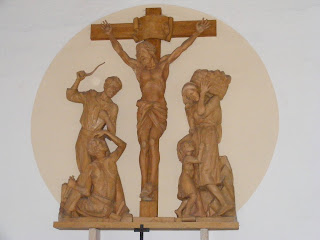 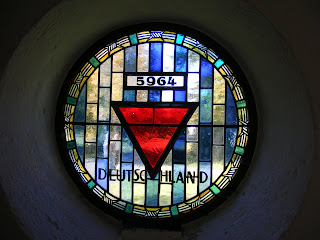 The church also contains a bust of Dietrich Bonhoeffer, one of the most influential theologians of the 20th century and an opponent of the Nazis from the very beginning. He was hanged by the punishment barracks on the 9th April 1945. His theology would later influence huge theological debates on the nature of belief in a secular world, in particular the 'Honest to God' debate within the Church of England in the early 1960s. You can see the remains of the barracks where he spent his last months, which had been left largely untouched, below. 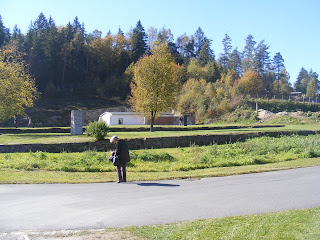 It might also be of interest to know that nine British officers were shot in KZ Flossenbürg in 1945. Britons were rarely sent to concentration camps as they were usually categorised Prisoner of War. However dozens of members of the Special Operations Executive (SOE), who worked with the Resistance in France, were sent to camps as spies. There is a grave in the honorary cemetery commemorating their deaths, as well as this plaque in the Chapel. 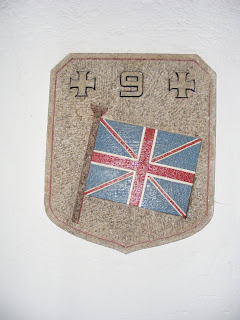 KZ Flossenbürg almost did the unthinkable and disappeared entirely, yet after over sixty years there is now two permanent exhibitions on the site. However, unless you have a car or a good couple of hours to spare making train and bus connections, it is unlikely many people will see it. For all the effort, the KZ Flossenbürg remains almost forgotten.