Working with the Past

Today, I was taken for a tour of the memorial site for the first time. In the last few days I've had the opportunity to explore the site on my own, but I had hesitated to go in the exhibition or the crematorium until this point. Klaus met us at the Besucherzentrum (visitor centre) where he began to explain the pre war history of the site. A former munitions factory during WWI, when the Nazis came to power Heinrich Himmler (then in charge of policing Munich) saw the potential of the site as a possible concentration camp. On the 22nd March 1933, the camp was opened.

We moved through the Jourhaus, the gate house most well known for the gate saying 'Arbeit macht frei', and then toward the permanent exhibition in the former Wirtschaftsgebäude, or Maitenence Building. 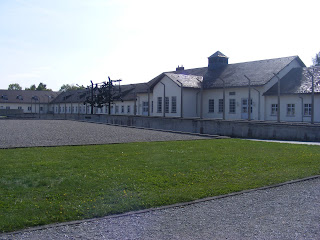 Though there are boards explaining the history of the site, much of the interior has been left as it would have been back when the camp was liberated; paint flakes off the walls and much of the concrete is exposed. This was where the new inmates were brought and 'processed', and I assume that this was an attempt to remind us that this building is as much a part of the site's history as any other.

Pictures of victims before their internment are everywhere. I have seen plenty of them over the years, as we all have. A gentleman in his early forties well dressed and enjoying a summers day. A woman sitting with her young children in the garden, also enjoying the sunshine. Perhaps I have seen too many of them. I am well aware each one is a life turned upside down by events of history, yet they no longer move me in the way I feel they ought to. What did move me was the pictures of medical experiments on prisoners, then the film by the Americans of piles of bodies waiting to be cremated. I still find it hard to connect the black and white images of the 1930s with that footage of the liberation of the camp. 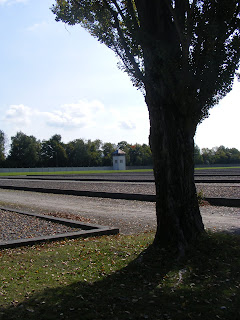 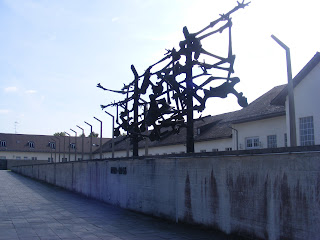 I have now been here just over a week, and it is only now that I realise this is no longer a holiday or a 'school trip'. I suddenly feel the huge responsibility I will eventually have not just as a guide, but as a representative of the ongoing effort to remember the past correctly, no matter how painful that may be. I'm sure there will be many graces, but what affect will it have on me? How will I react to living and working day to day with these memories?