...so goes the opening line to Rainer Maria Rilke's Poem Herbst (Autumn), and he's right- it is about time too! I swear in the last twenty four hours the temperature has dropped by ten degrees centigrade, kicking us into Autumn. It seemed like a fitting way to end what was a rather morbid tour of Dachau yesterday afternoon. I was taking part in a guided walk along the 'Way of Remembrance', between Dachau station and the memorial site. The route roughly corresponds with the route that the train line took in the 1940s, and by the roadside stand info-boards with pictures of trains carrying people like cattle. Today, it is a lovely cycle path along which I ride regularly when heading into work.

It has not been difficult to settle into life in the town of Dachau. I know that it has been here for longer than Munich, that for all but twelve years of its history the town has been thriving on the fertile lands that surround it, and at the turn of the century the town heaved with some of Germany's best known artists. Yet really I forget that the whole town would have known about the concentration camp. The "Fruehlingstrasse" has my favourite kebab vendor in town. During the 1930s was renamed "Adolf-Hitler-Strasse" and a few doors down from my kebab place was a bar that was popular with the SA. 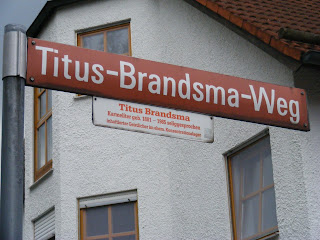 I remember before I left York somebody asked me, "How can people live [in Dachau] after all that happened during the war?". The answer is, quite easily. Titus-Brandsma-Weg is a small street with houses that, from the bedroom windows, have a clear view of the memorial site. These buildings were built well after the war and, quite possibly, after the 1960s and the development of the site as a memorial to the victims. In the 1980s the Commandant's villa along what is now the "Strasse des KZ Opfers" was demolished. On that spot these days is a basketball court for the local residents.

Some would say that ultimately this is a triumph for goodness, that the fact life goes on normally here after such barbarity is a fitting tribute for those whose normality was cruelly stolen from them. As with many things here, I reserve my judgement for when I have lived here a little longer and understand what it is to be a Dachauer.