Here's the second part of my reflection on my visit to KZ Gedenkstätte Buchenwald...

After the tour has concluded, we are at liberty to wander the site alone. Most of the group heads back to Weimar, but I remain with a few others to look round the rest of the site. I still cannot believe how large the site is. I have been working at KZ Gedenkstätte Dachau for six months on a site approximately a kilometre long and about 600m wide, all that remains for the purpose of memory. The rest of the land, preserved at KZ Gedenkstätte Buchenwald, is taken up by houses, shops, a kindergarten, the HQ for the Bavarian Riot Police. Dachau's land was usable. KZ Buchenwald was built miles out of Weimar and on a hill.

The others have gone off in groups of two, so I decide to wander now. On the top floor of the former Wirtschaftsgebäude there is an exhibition focussing on a few of the photos taken in the days following liberation, as well as those who took them. The majority are American press photographers, a few in uniform, some also SS officers later tried and hanged. I recognise one of the photos immediately. Taken by a member of the US Signal Corps, it was used in an exhibition in Washington in late 1945 designed to justify US involvement in the war and has thus become one of the most recognisable images of the Holocaust. It is also well known because poking his head round on the middle bunk, seventh from the left, is Elie Wiesel.

Noone else except perhaps for Primo Levi has written so much on the Holocaust and come to define its memory more than Wiesel. Before I came to Germany I read 'Night', his Nobel prize winning memoir of his interment in KZ Auschwitz and KZ Buchenwald. One paragraph remains, and perhaps even informed the posts I made a couple of weeks ago on the Death of God. It's often used during Holocaust Memorial Services and in classrooms, so you will most probably recognise it: There is another story to this site, not as well known but as important. 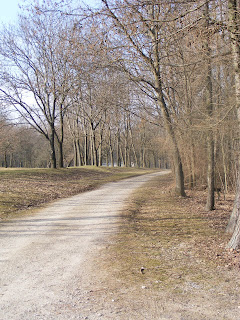 Beyond the trees, in the woodland that surrounds the former Appellplatz and Barracks, stand hundreds of metal poles. In late 1945, once the Americans had handed over the site to the Soviet Union in accordance with the terms laid out at the Potsdam Conference, the site was renamed NKVD Special Camp No.2. Those who were seen to be a threat to the new Soviet regime were interred here, including Social Democrats, former Nazis and any suspected opposition. The camps remained in operation until 1950, in which time thousands died from similar conditions to those experienced under the Nazis. 7,113 people died. Their families were never informed of their fate, and it was only after the fall of the Wall that people were allowed to use the site to commemorate the dead. 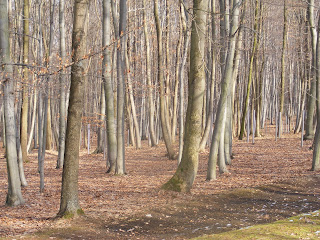 A large cross stands in the middle of the metal poles. It turns out that this was the place where the bodies were buried en masse, with the poles symbolising the graves denied them. I wander along the edge of this mass grave, and my mind is cast back once more to Dachau and the few plaques in the memorial garden, just to the right of the Crematorium. It is a different feeling, akin perhaps to the site of the memorial stones in the Dachau Waldfriedhof
. 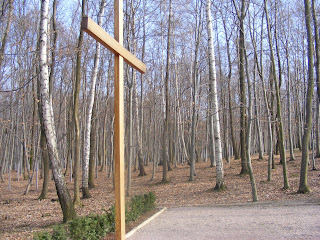 There is an initial problem on my part. I wonder if some of these men were Nazis, those who had helped to erect the camp they would die in in the first place. Are they worthy of our memory? It is difficult to think of them as victims and purpetrators at the same time. This is a recurring theme in remembrance culture, one that is intensely controversial and can be difficult to explain. I head back towards the gatehouse.

I am mulling over these things when I notice the time. It is 14:45 and most likely I am the last of our group left here. I wander out about 2 km along the main road for one more important part of this memorial site...