Leitenberg Stations of the Cross

It is traditional for Catholic Christians to pray the Stations of the Cross during the season of Lent. Click on the link for a detailed description of the devotion, but to put it simply it is a series of fourteen scenes from Christ's walk up the hill to his crucifixion. As with most Catholic devotions, these scenes are chosen not to be accurate but to allow Christians to meditate on particular aspects of their own character and areas in which we fail to live up to our calling to love and serve God and his people

Sorry, that got a little preachy. At the weekend I joined the Catholic Chaplaincy to the Memorial Site in praying these stations at the Leitenberg Cemetery, where over 7,900 people are buried in eight mass graves. Among them are concentration camp prisoners and c. 1500 Wehrmacht soldiers.

The following reflections, prepared and led by Ludwig Schmidinger and Fr. Klaus Spiegel OSB, focussed on the actions of actual prisoners and compared them to Jesus' suffering on the Cross. This made for an extremely moving experience, especially for a group of almost fifty Dachau citizens. Every Friday (and on the days leading up to Easter Sunday) I'm going to post one of the eight stations.

STATION ONE: JESUS IS CONDEMNED TO DEATH 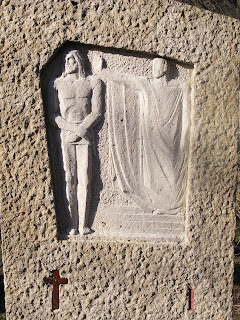 V: We adore you O Christ, and we praise you

A: For by your Holy Cross you have redeemed the world

Persecuted without just cause, in an entirely arbitrary and imperious manner; in this way over 200,000 people were brought to Dachau Concentration Camp. At the very beginning it was made abundantly clear to them what lay in store for them: “no rights, no honour and worth nothing” – and thus they were treated, sworn at, beaten, abused and preyed upon. Every fifth one of them was so treated to the point of death. To judge them, pronounce a judgement on them – to dismiss them as troublemakers and as non-persons; we recognise this tendency in ourselves as well as others.

How often people place the blame on God for the state of the world – we judge him for it; how often people fail to see their own responsibilities and simply offload them on to other people . Lord Jesus, you took on Pilate’s sentence without so much as a word. We ask you:

A: Lord, have mercy on us and on the whole world. 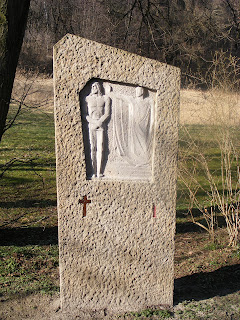