When writing about my seminar I didn't mention one of the most important moments of the week. The seminar leaders planned into the week one day to visit KZ-Gedenkstaette Buchenwald, approximately fifteen minutes outside of Weimar by bus. The group seemed unsure of going, and we spoke little on the bus journey there of what we knew about the Nazi Persecutions. It was agreed that we would join a guided tour offered by the site, then be allowed to wander the area and look round the exhibitions alone.

I wanted to make clear how we went round the site for a reason. The way in which we visit a memorial site, approach and engage with the land itself is incredibly important. I hadn't had the opportunity to visit a memorial site as a visitor since a day trip to KZ-Gedenkstaette Auschwitz in 2006, and I didn't have a tour of the memorial site in Dachau until at least my fourth visit to the site. It was very different approaching a Memorial Site as a visitor. As engaged as I am with the history I remained a stranger to the life of this site and, loath as I was to admit it, I was a tourist.

The tour was a short one, barely ninety minutes, in which we were introduced to the land and the basic history was explained. I heard familiar words, like Appellplatz, Krematoriumsbereich, Baracke, Wirtschaftsgebauede, Bunker. The only difference was the numbers, the names, the prisoner groups. KZ Buchenwald was established in 1937 as part of a shake up of the KZ-System. Theodore Eicke, the second Commandant of KZ Dachau and later Chief Inspector of the Concentration Camps, set up KZ Buchenwald and KZ Sachsenhausen at this time as Stammlager, central camps much bigger than before and with a network of small sub-camps with specific work details. I began to find it hard to concentrate on the differences between KZ Dachau and KZ Buchenwald, wanting to remain in the security of my knowledge of KZ Dachau. 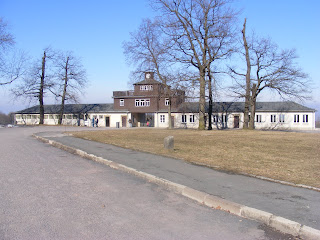 We walked through the Gatehouse, where the words Jedem das Seine (All get what they deserve) taunt prisoners in a similar way to Arbeit macht frei. The site is vast and surrounded, as in the name, by woodland.

The crematorium and the morgue are not hidden, but clear for all to see. Here there was also a Genickschussanlage, literally a place designed for the shooting of soldiers in the nape of the neck. I am first amused by the beauty of the word on the display board, with its German stickle-brick logic - literally 'back-of-the-neck-shoot-enclosure' - then I am surprised at myself, that that is all I take from the place where 8,000 Soviet soldiers were murdered. I lean against the walls without thinking and my friend Karina lightly nudges me. The room is reconstructed, yet she finds something repulsive in my action; the walls still feel coated with the residue and bodily fluids of those men. Karina is Belarussan. I follow the group outside to where the barracks stood. 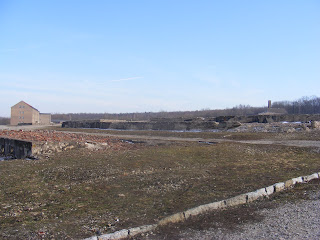 In one of the rooms in the Crematorium there is a wall covered with a few sparsely mounted plaques, some for individuals, others for groups and nationalities. There is one dedicated to British Officers of the Special Operations Executive (SOE), those who were in Block 17. There is the standard remembrance text for British and Commonwealth troops, one read out in Remembrance Services around the world in November:

At the going down of the Sun and in the morning, we will remember them

Later I stand by the rectangle of concrete and gravel that represents where Block 17 once stood. This is the closest I will ever come to experiencing what my Eastern European friends feel when they see a plaque with hundreds of familiar sounding names on them. McAllister. Thomas. I do not know how to feel. Their numbers were negligible compared to the plaque a few metres away for thousands of Poles, yet there is an attachment I feel to the familiarity of these men. I imagine them with pipes and well groomed moustaches, using phrases like "Right-O" and "Golly" in the way they do in the films. I realise Reality and Fiction are colliding again. This happens where national memories are concerned. 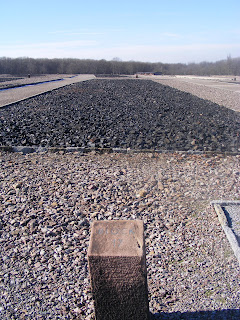 I make my way to the permanent exhibition. It is far better than KZ Dachau's, more detail and far more objects. More use of multimedia and less of display boards. Then again, I am not sure if this is better. The exhibition in KZ Dachau works best with a tour guide who can use the exhibition to illustrate their point. This is more like a museum. Memorial Sites should breathe for those whose breath was extinguished; Museums do not breathe because they are not designed to. I carry on round.

Outside there is the Goethe's Oak. This area was chosen by the Nazis for its association with the master of the German Romantic movement, the embodiment of the German spirit. The Oak stood in the camp as a sign to hope for the prisoners, of a Germany that was not yet dead but lived somehow through Romanticism despite all the Nazi's did to try and destroy it. They were forced to watch it burn in the last weeks before liberation when it was hit during an allied bombing raid.

I'll say more in my next post. That's enough for now.