A few days in Weimar

Before I post on a rather depressing topic again, I thought I'd share a few of my photos from my few days in Weimar. I was there for a EVS Mid Term Meeting, the third of the four seminars that make up the European Union's attempt at pastoral care for its underpaid, overworked volunteers.

Essentially we spend a few days eating well and socialising, talking about how we deal with conflicts within the workplace and hearing what new and exciting things the EU can do for us. I must admit it has given me a few ideas for things to do when September comes and I move on to pastures new, but that's something for another time.

One of the best things about these seminars is that the organisations that facilitate them on behalf of the EU often try and ensure they are held in different German cities, so we end up with an all expenses paid trip to another part of Germany. This was my chance to look round Weimar, the birthplace of German Romantic culture.

During the 18th Century, back when Munich was still a religious community and Berlin was just provincial Prussian bogland, pretty much every important writer and composer came to Weimar. Goethe lived there, Schiller lived there, Bach was resident for a few years, even Martin Luther lived in a Franciscan monastery for a time and was married there. Today Weimar is a sleepy tourist town that lives from its past and from its student population, a little bit like York but with less industry in the surrounding area.

I haven't read much of Goethe's work in German, partly out of fear that it would be like reading Shakespeare as a ten year old. I had however read 'The Sorrows of Young Werther' in English translation and bought myself a copy of the German. Werther is an amazing story, in which a man falls in love with a woman he can never have, with tragic consequences. I love the Opera adaptation by Jules Massenet.

One of my favourite moments in the Opera occurs at the end of the second act, when the object of his desires, Lotte, walks off a married woman and he is left inconsolable. He then decides that if he cannot have Lotte, he will take his own life, convincing himself that it is God's merciful plan for him to end his suffering. The concluding line of the aria gives me goosebumps every time:

Father! Father! Whom I know not but in whom I trust, in whom I hope - call me.

The following is a production with Jonas Kaufmann as Werther, in French with German subtitles. The bit I mean begins with 'Oh Vater, den ich nicht kenne':

So, a few photos were in order. Statue of Goethe and Schiller in the Theaterplatz. The Constitution of the Weimar Republic, the first democractic German government, was proclaimed from the balcony of the theatre in late 1918 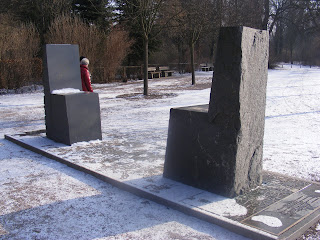 Goethe admired the 14th Century Persian poet Hafez, and wrote 'The West-Eastern Divan' as a response. This memorial symbolises the efforts of the Romantics to recognise the mutual enrichment that the Orient and the Occident could offer each other. 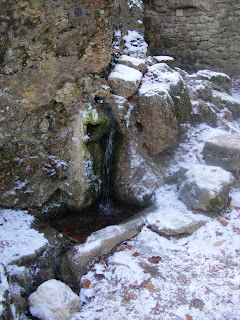 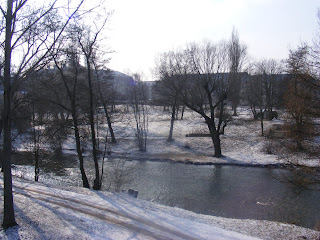 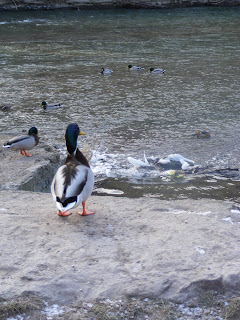 ...and finally some shots of the Park by the River Ilm, including a duck pondering life's big questions...