Why do I love Berlin so much? I'm in town for the second of four seminars run by my sending organisation, Aktion Suehnezeichen Friedensdienste, and I'm staying in a typical Berlin Youth Hostel i.e in a dingy, converted factory. Berlin means a lot to me on a personal level. I first came here on a school trip aged fourteen and the city continues to change with me. The Palast der Republik has been taken down and a Hauptbahnhof has been built. A city that was for decades a byword for men in trench coats and suitcases is now the poster child for an invigorated and politically ‘redeemed’ German nation. 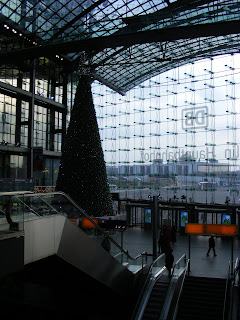 Berlin has reinvented itself – and not for the first time – as a youthful city. One sometimes gets the feeling that the forty years of divided rule acted as a kind of purgatory for the city, in which all Prussian militarism and Nazi association were removed through the torture of security checks and foreign government, ending finally with the events of November 1989 and the huge opportunities for development. One word describes the city: Alternative, the kind of alternative that, like the mythology of the 1960s in the UK, is always happening to someone else. It is the sociological equivalent of a twenty two year woman with multiple piercings, multi-colored hair, a ripped shirt and an ill fitting bowler hat, this of course being her work uniform. There are art projects here, all sorts of buildings converted into bijou apartment blocks and studios as well as the kind of clubs and bars that are designed not for profit but for exclusivity.

Anyway, back to my seminar. The purpose of these seminars, organized alongside compulsory EU ones, is to allow us the chance to learn about the place of contemporary debate within discussion about the Extermination of European Jewry. On the 3rd December we visited the Haus der Wannsee-Konferenz for what I assumed would be the usual memorial site visit. The Wannsee Conference is notorious as the meeting at which the Final Solution was decided, where numbers were crunched and the mass murder of millions was concisely processed. I expected to be taken through an exhibition explaining the Holocaust, with the centre piece the room in which, over brunch, Jews became numbers.

Of course History and Memory being the couple they are, preconceptions were not true. The minutes of the Wannsee Conference, known as the Wannsee Protocol, describes a formative moment in the extermination of European Jews but by no means the beginning or the end. Mass murder of the Jews had been set in motion by the Nuremberg Race Laws of 1935 – in hindsight what other conclusion could there be? – and Wannsee was but a bureaucratic meeting to confirm who would do what and who was in charge of the operation. After all, what makes the Holocaust unique in History is the bureaucracy and systematic nature of mass murder, an age old crime committed within a contemporary morality. 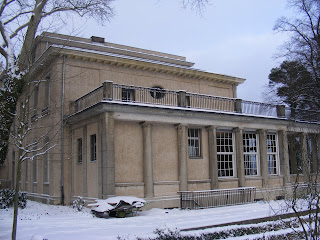 The exhibition was not to my taste, and followed the usual pattern of Concentration Camp Memorial Site exhibitions. In my humble opinion they tend to be text heavy, relying on the same descriptions and the same photos to make the same points. Visitors, in particular individuals unattached to groups, do not come to read; they come to see and to feel. According to the ASF volunteer who works there, an Israeli woman, the site receives many Jewish groups who view Wannsee not as a place of learning, but as a place of remembrance. Despite the assertion that Wannsee was one of many stepping stones to mass murder, many Jews view Wannsee as the grave they do not have. Visitor Guides explain the history, and yet they do not listen, such is the mythology that we build in order to be able to come to terms with the past.

Berlin is great, alternative as ever and it’s fantastic to be back with my fellow ASF volunteers. More to follow.