Just another day at the office...

One of the many wonderful things about my work in Dachau is the variety of projects I am involved in. I work with the Dachau Youth Hostel's Educational Department once a week, eventually with taking visitors round the site, with the Church of Reconciliation and with the Remembrance Book project. We discovered in late October that the Remembrance Book project had been awarded a Bürgerkulturpreis (Citizen's Cultural Prize) by the Bavarian Landtag (Parliament) and as such were to attend a ceremony at the Maximiliansaal, where the Parliament meets. 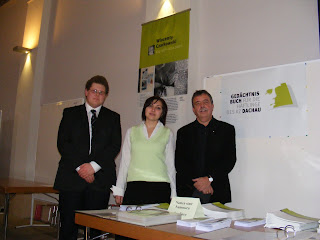 Myself, Irina and Klaus Schultz by the Remembrance Book project stall

We all dressed up for the occasion and got to spend the day in one of Munich's best buildings, where Irina and I manned our display stand. The Remembrance Book has so far about 130 biographies, and is growing all the time. One of the best things about the project is that it is open to all interested. Schoolchildren, priests, relatives are invited to engage with the life of a person who was transformed by their experience of KZ Dachau and hopefully learn something of their suffering not only during their time in Dachau but living with the memories afterwards. Thus the project gives the prisoners their lives, their identity back

A great day was had by all, as we all got to see a worthwhile cause receive well needed cash and promote the project to interested visitors. While eating our lunch, Knödel mit Gulaschsuppe, we were visited by a middle aged woman who asked us about the project. We obviously answered her questions willingly and explained our situation as volunteers, which suitably impressed her and she went on to the next stool. I jokingly told Irina we'd probably discover she was the Queen of Bavaria or some other lofty title.

Later on she returned and our bosses had their photos taken with her. Afterwards I asked Klaus who she was- It was only the President of the Bavarian Parliament and one of South Germany's most prominent politicians! 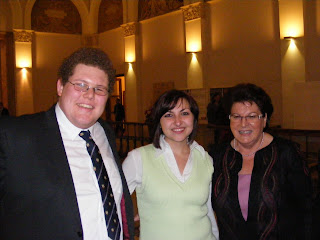 Myself, Irina and Frau Stamm, President of the Bavarian Parliament

I also had the privilege of meeting Max Mannheimer for the first time. In this part of Germany he needs no introduction, for he has spent the last thirty years or so telling people about his suffering in Auschwitz, Teresienstadt and finally Dachau. He is now the inspiration behind the International Youth Meeting, which meets in Dachau every July/August, and the Max Mannheimer Study Centre, for which I volunteer once a week. I have found meeting Holocaust survivors quite intimidating - what do you say to someone who has been through so much? - but he was extremely friendly and spoke in perfect English about my work and the project. It was a pleasure to meet him and hopefully not the last time.

It was a great experience to represent the project and spend the day celebrating the achievements of an extremely worthwhile cause. 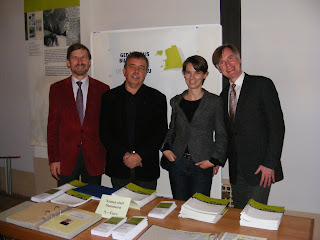