I am back in Dachau after a very moving few days in Mainz, where I was staying with the Carmelite community there in order to research the life of Br. Raphael Tijhuis O.Carm. A friar from the Netherlands, he was arrested in 1940 after writing 'slanderous' comments in a letter to his provincial- he had actually suggested they take their church bells as they were banned by the Nazis from ringing them! - and spent five years in German captivity, three of which were in KZ Dachau. After the war, he moved to Rome to live in the Carmelite community of Sant' Alberto, the college for student friars. In 1978 he moved back to Mainz and died there during the celebration of Mass in 1981. Many are convinced it was the psychological effects of KZ Dachau that led to his rather premature death. 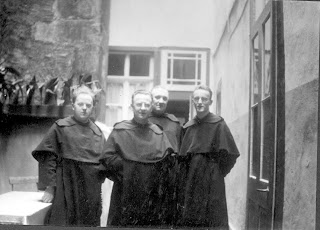 Br. Raphael Tijhuis, O.Carm (far right) with some of the Mainz community c.1930s. Also in the picture is Br. Thaddeus Karpinski O.Carm (far left), who would die on the Eastern Front

My time in Mainz was mostly spent with one document, his memoirs of his time in captivity written in the post war period. I had read the English translation "Nothing Can Stop God From Reaching Us", an edited version, but they were far inferior to the full document. With the title Von Kutte und Verbrecherkluft (lit. 'Of the Habit and the Prison Uniform') Raphael spoke of his time in KZ Dachau with great clarity, despite the fact he was writing in German, a foreign language to him. I plan to translate extracts into English and post them here in the coming months, but I will start with the thing that most struck me.

The first page of his manuscript began as follows:

(The Dead speak through us)

The thought of Raphael, sitting down at his typewriter with all sorts of thoughts running through his mind about what to write, how to portray other people and his responsibilities to the dead, and him typing out that first, focussing word, a prayer to Our Lady of Mt. Carmel, is frankly mindblowing. 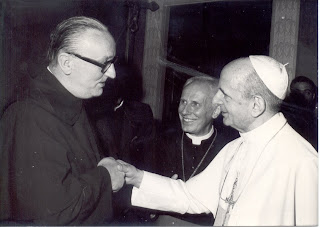 His faith was always strong and many call his time in Dachau a purification of sorts, in which he met Titus and began to grow into a mature faith. Later on, when suffering from the psychological trauma of those years, he was always good humoured and pleasant to know, and stayed in contact with many fellow survivors. His desire to tell the world of what happened, and in particular of Bl. Titus's actions, led to his involvement in the cause for the Beatification of Titus Brandsma, which took place in 1985, four years too late for Raphael.

It is a pleasure and a privilege to be able to research the life of such a humble and inspirational man, who refused to hate humanity, and in particular Germans, despite being given reason to do so. 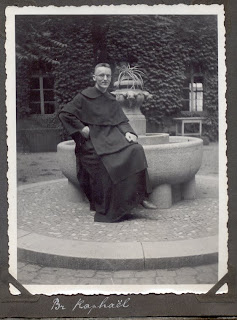 Br. Raphael in the courtyard of the Carmelite maintained school adjacent to the Carmel in Mainz, c. 1930s
Posted by Roy Scivyer at 14:17