This time next week I will be in the small Polish town of Oświęcim, better known by its German name of Auschwitz. A quick skim over the Wikipedia article on the town shows it to be both a nice little town, not dissimilar to Dachau, and strangely enough the hometown to a number of professional ice skaters. So, similar to Dachau, this town has settled into a sleepy existence, awoken uneasily by the steady number of international tourists coming to see the place down the road where 1.1 million were gassed, tortured, beaten and worked to death.

I have been before. When I was eighteen and in the Upper Sixth at school I was invited to take part in a Holocaust Education Trust project to send two students from every school to the memorial site in Southern Poland. The day was intense thematically, though the time pressure was the worst; we made the trip in a day, which included return flights from London Luton Airport to Krakow, bus transfer from Krakow to Oświęcim, then the two memorial sites of Auschwitz I and Auschwitz II (Birkenau). There was no lunch break, and we met no Poles with the exception of our guide round the site. Our teacher at the time, Ms Piavanini, had chosen us specially for the trip, and in an act beyond the call of pedagogical duty had bought us both copies of the book The Boy in the Striped Pyjamas to read on the journey.

I and my friend, OB, spent much of the day being forcibly cheerful, unsure of what to expect. There had been a preparation seminar in Cambridge a couple of weeks before, at which we discussed the reasons for visiting a memorial site. Of course back then I had no idea that within five years I would be an active part of the Holocaust tourism industry, but the response was rather unified: seeing is believing. Yet looking back, I can remember both of us feeling uneasy at the fact neither of us wanted to weep, or break down, or be removed having fainted. We went round the exhibitions, piled with human hair and belongings, as well as the (horrifically) familiar black and white photos, and yet despite all this neither of us was particularly moved.

Since then I have put this down to our historical distance from the Holocaust and its story of the 'Other', the European, or at the very closest, the immigrant. Had ASF not given me the opportunity to go back, I would not do so. I have seen it once; to go more than that seems extravagant, almost perverse. However, there is somewhere I have a strange longing to go, to see, despite its unfathomable historical and geographical distance: Kolyma.

Our impending seminar in Oświęcim is taking place at a time when my mind is looking eastwards, at the neighbours who have baffled us since the days of the Tsars. I recently came across Martin Amis's Koba the Dread: Laughter and the Twenty Million a sort of literary exploration of the Purges in the Stalin era Soviet Union. It is Amis's own attempt to understand how his father, Kingsley, came to be a member of the Communist Party in 1940s Britain as well as a journey through the statistics, testimony and facts of the Gulag. Of all this, the place that shocks him most is Kolyma, a small outpost in the far reaches of the Arctic circle where Stalin sent over 3 million people to work and, so he hoped and expected, die. They mined for raw materials and built roads in sub zero temperatures. Nearby are some of the coldest inhabited regions on Earth. The journey there often took weeks, months even, as people were transported thousands of kilometres from their places of birth. Once there, they were kept and forced to work for as long as the government deemed fit. Some were within the Gulag system for upwards of twenty years.

Probably one of the best ways to illustrate Soviet deportation is in Budapest's House of Terror, a museum in the former Secret Police building. I was there in the summer of 2007, with friends after exams and before university, a period of teenage flux when the world feels like it has nothing on you. We went inside completely unaware of what to expect, and one of the first exhibitions was on deportation. The room was covered in a rug with a map of Eurasia. About a fifth of the rug was Europe, then a little further on was Moscow, Leningrad and the Urals. Then there was a huge expanse of 'land'you had to walk over to reach the other side of the room and the information on Siberia and the Gulag. Four years on, that time feels a lifetime away but the memory of that room and the realisation of that unfathomable distance has haunted me ever since 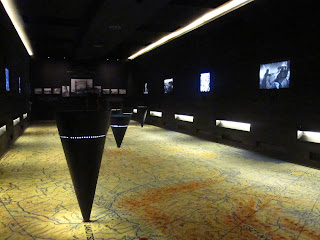 To read all this leaves a kind of natural silence. Not a clamouring of agony, or cries of that weak plea of humanity, "Never Again", now engraved on countless memorials to Holocaust victims, but an emptiness, an acceptance of a reality we cannot control. It is perhaps similar to the images of hundreds of thousands of dead Tutsis in Rwanda, massacred Muslims in Bosnia, or millions of dead workers in Mao's China. The numbers are horrific, but nameless and far too foreign for us to want to comprehend. We let ourselves sit in ignorance. Let me quote you a section from Koba in full:

In 1997, during an interview with Le Monde, [British Historian] Robert Conquest was asked whether he found the Holocaust "worse" than Stalinist crimes: "I answered yes, I did, but when the interviewer asked why, I could only answer honestly with 'I feel so'"

I feel so. The Holocaust remains far more shocking because it is something that a) was a fundamentally populist movement, if a German one, b) was an industrialised and economically driven exercise and c) aimed to exterminate entire ethnic groups entirely in cold blood. Stalins Purges were, in some ways, still rooted in that old fashioned view of violence as impulse. They are not 'particular' like the Holocaust was. They get lumped in with mass murders. Notice Amis, in quoting Conquest, refers to 'Holocaust', a highly emotive word, and 'Stalinist crimes'.

It's most likely a western thing. Thousands of those families came to live in Britain during and after the war. At our preparation seminar for Auschwitz back in 2007, we were introduced to Kitty Hart Moxon, who survived Auschwitz and came to live with relatives in England. She spoke eloquently and in perfect English before a large banner with her looking defiantly into the distance. Her story was one told many times over, worked through into a narrative that no longer hurts. I've noticed the same with other 'regular' Holocaust survivors who talk about their experiences. The Ukranian, Belarusian and Russian survivors who visited Dachau a few weeks ago were, in some cases, telling their stories for the first time. They had spent their entire lives in the Soviet Union, mistrusted as collaborators after spending so long in German captivity, and only in the last few years had they been invited to tell their story. Some of them had little contact other than this visit. Imagine that: the most contact and friendship you get in an entire year being a visit back to a concentration camp.

Auschwitz is a place now synonymous not only with violence, but with evil as well. Other mass murderers don't have that same emotional pull. Noone says 'I feel so' about Rwanda, or Cambodia, or Siberia. That's what I'm going to have to contend with when I set foot through that iconic gatehouse and see the traintrack again, where the selections took place, where people were left hoping that 'Left' or 'Right' meant surviving that day. At the same time though, I still carry with me this question, why it is that we 'feel' the pain of the Holocaust yet can read and discuss other acts of twentieth century mass murder almost unmoved? I am not trying to move attention from the dead of Auschwitz, and we have still lots to learn from this example of Western European genocide.

Perhaps (ironically enough given how separate many ofus feel from this history) our familiarity is the root cause of all of this; the victims of the Holocaust were often westerners from the land that produced of Hegel, Kant, Freud, Luther, Einstein, Beethoven, Wittgenstein among so many others. We thought we knew the Germans. We didn't expect them to massacre an entire section of their population. But the 'Russians'? Communist purges fit into a millenia of massacres, tyrannical governments and oppression that has taken place in Eurasia. Perhaps Stalin merely lived up to a western stereotype, as did those in Rwanda, Cambodia and Bosnia. It's a horrific prospect, but one I suspect has an element of truth to it.

If only everyone could see Auschwitz, Dachau and other places with their own eyes. They would realise it is not the coldness and distance that should shock us, but how familiar these places are, how recognisibly human. To send an opponent away to solve the problem. To use people as tools to build a regime. The maxim of 'No person, no problem.' The next step, is to go to Kolyma, see the remains of human bones lying half buried and know that that too was carried out by the same kind of human.

If my views change in the next week or two (which they might just do) I'll let you know.