Kirchentag with old friends (and two new ones...)

Last week I had the pleasure of representing Action Reconciliation Service for Peace (ASF) at the Deutscher Evangelischer Kirchentag in Dresden. As I appear to have inadvertently written three Carmelite posts in a row, I thought it might be nice to let you know about what is going on right now in my life, an event that's quite a big deal in Germany from the looks of things...

On 1st June I spent five hours on a coach full of young people, all geared up for five days of talks, reflections, dramas, concerts and workshops. This is the Kirchentag, a religious festival with a surprisingly secular reputation, held once every two years. Bringing 120,000 people along with it, the festival takes over any host city and for the duration the east German city of Dresden was overrun with a curious mix of ages. The closest thing I can compare it to in the UK is Greenbelt, which although hosting a similar mix of liberal theology, dread-locked acoustic sessions and everyone-is-welcome-and-it's-awfully-nice-to-come-togetherness comes nowhere near this scale. Or this level of respectability. The German Chancellor Angela Merkel was speaking at an official event (her father was a Protestant minister in the GDR at a time when it was the only way to speak out against the regime), as was Leader of the Opposition Sigmar Gabriel. For all Greenebelt's good intentions, the platform they offer is for a minority audience; this had regular updates on N24, Germany's version of BBC Parliament. 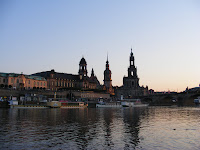 So what was my place in this miasma of good feeling and middle age? Over the course of three days ASF had a stall in the Markt der Moeglichkeiten, or "Market of Possibilities", in which we had the chance to speak to young people wandering around, thinking about what to do after school. In Germany the 'Gap-Yah' concept is not so much frowned upon as a luxury as actively encouraged, particularly given the need to learn English and at least one other foreign language. Up until January all eighteen year old boys had to undertake either six months military or eight months voluntary service. ASF is just one of hundreds of organisations that support volunteers.

We also had a serious political purpose for being there. As yet another measure of the Kirchentag's political importance, the Secretary of the Kirchentag was invited to report to the Bundestag with a number of resolutions supported by at least 3,000 Kirchentag participants. ASF's was a petition against the imminent deportation of 10,000 Romany people from Kosovo who immigrated to Germany during the war in Kosovo in the late 1990s. This is not a particular popular issue in Germany, where most people associate the Sinti and Romany communities with thieves, beggars and criminals. We're not above this of course, as anyone in the UK who saw My Big Fat Gypsy Wedding can attest to. Needless to say, we reached our goal of 3,000 on the first day, such was the strength of our team, and our Resolution gained the most support. 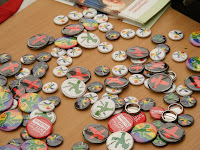 And we sold buttons, or badges as we Brits call 'em. Lots of them. German teenagers can't get enough of the iconic East German 'Ampelmann' (traffic light man) and his 'Go Think' catchphrase!

Much of my free time was spent as ever with friends, as a number of ASF volunteers from Berlin had popped down from Dresden to help out. We wandered the reconstructed streets, relaxed along the banks of the River Elbe and generally enjoyed the early June sunshine as well as the gorgeous sunsets they produced. As an Englishman in Dresden, I searched long and hard for the memorial to the almost 30,000 who died during the Allied Bombing Raid and the resulting fire storms in February 1945. There was an altar dedicated to the victims of National Socialism in the Catholic Cathedral of the Trinity, though little else. I assume this has something to do with Dresden's place as the focal point for far-right anger. In February there were violent clashes between Fascist and anti-Fascist demonstrators, as there have been ever since the wall fell. In the words of Kurt Vonnegut, "So it goes".

On the last night we were told there would be attending something called a Russendisko at the German Hygiene Museum. All the ASF volunteers were invited, so we duly arrived an hour early at a (ironically enough for a Hygiene Museum) clinical-white bulding to find that hundreds of people were also vying to get in. We were the lucky ones, and we settled down to two and a half hours of Eastern european club anthems, all mixed by the self appointed master of Russendisko, Vladimir Kaminer. A Russian of Jewish ancestry who came to Berlin in 1990, he developed the Russendisko during Berlin's fledgling years of post-Communist growth. His club nights became immensely popular and are today a mainstay of the German club scene. Today he is as famous for his collections of short stories as he is for his club nights. He writes primarily about his own experiences as a Russian in Germany, as well as about modern Russian culture, all in his own sarcastic and self deprecating style. He writes in German (something I consider very impressive!) and narrates his audio books himself, with trademark Russian accent. I'll let you know how I get on with his books.

One final thing before I end this rather rambling account of Kirchentag. I met two young bears during my time in Dresden. They are Rudik (Rudolf) and Moosh (Mashambanzou), and they were helping out at a stand on HIV/AIDS relief (they are HIV positive). I asked them where their rather interesting names came from; Rudik is named after Rudolf Nureyev, who danced through his illness before dying of AIDS in 1993, while Moosh is short for Mashambanzou, which means 'The darkness before the dawn', or simply 'hope' in Zimbabwean and is the name for a hugely successful HIV/AIDS education project near Harare. We got chatting and they mentioned that they hadn't seen Bavaria yet, so I invited them to come stay with me for a while. Here they are, having cleared everything with their project and smuggled on to the bus back to Dresden with me. 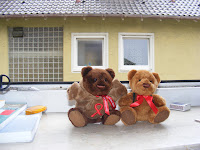 They will stay with me and remind me of a great few days, and in particular of the surprising ways in which faith and politics can sometimes interact with mutual respect.